Who appoints the Chief Justice of India (CJI)?

Who can become the Chief Justice of India?

Apart from being an Indian citizen, the person must

What is the system followed for recommending and appointing judges?

What are the  government’s Memorandum of procedure for the appointment of Supreme Court Judges?

What were  the various cases leading to the current system of appointment?

What is the procedure for removal of CJI?

What are the various steps for removal of judges from office?

The procedure for removal of judges is elaborated in the Judges Inquiry Act, 1968.  The Act sets out the following steps for removal from office: 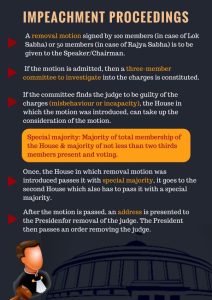