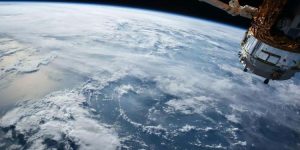 Military Space programmes all over the world: Every country worth its weight in salt is working on the military aspects of space.

Issues that may arise due to India -US joint space exercise: