India has questioned its bottom ranking among 180 nations on the Environmental Performance Index (EPI).

What is the Environmental Performance Index?

What about the EPI assessment of India? The Hindu Analysis 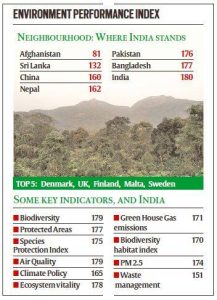 Do environmental scientists agree with the report? The Hindu Analysis

How seriously should the findings be taken? The Hindu Analysis

In this article we mention all information about Environment Index and India  Today Current Affairs.