It has been observed that during the monsoon seasons the temperatures are 0.3 degrees Celsius higher than the average summer figures’ which explains some anomalies in the climate change

Recently, it has been reported that the temperature during the monsoon season is higher in comparison to the summer season however it should be lesser. Generally, the Mansoon season gives us relief from the higher temperature but this year one side high temperature distraught the people, and on the other side high humidity also. 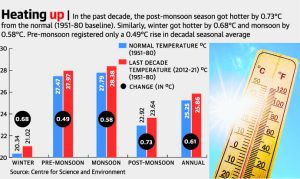 Causes of these Temperature anomalies : The Hindu Analysis

As per the report of the Institute of Climate Change Studies(An autonomous body under the state government of Kerala ), the temperature anomalies are increasing mainly because of less clouding on a higher number of days. “So, if rainy days are reducing, cloudless or less cloudy days will increase.

Pollution is another reason for the higher temperature of the cities. A city also generates a lot of waste heat due to human activities which adds to the natural heat. This extra heat should dissipate after sunset, but due to pollution and continuing generation of waste heat the city fails to cool down, leading to the warmer conditions compared to rural areas,”

As per the above analysis, it has been observed that due to pollution and Global warming how our daily life is being impacted. Therefore all of us should have civic sense and should try to reduce the pollution from our side. Because , pollution and climate change are the inevitable consequences of urbanization. therefore, we should opt for several measures to reduce the inevitable consequences of urbanization otherwise we have to pay the big cost of this climate change

In this article we mention all information about Impact of Global Warming on Indian Monsoon  Today Current Affairs.

GS papers I and III