GS Paper 3: Security Challenges and their Management in Border Areas – Linkages of Organized Crime with Terrorism. 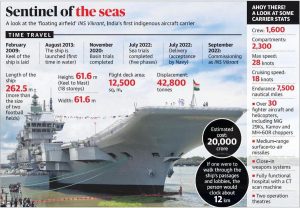 Why is INS Vikrant key to India’s maritime strategy?

What are various skepticism about the relevance of aircraft carriers in the contemporary world?

Conclusion: Deployment of maritime power needs to be anchored in the logic of geopolitics and long-term state interests, and not on contingent assessments of imminent needs.