News: No state funeral for Mikhail Gorbachev after his death at 91.

General Studies Paper 1: History of the World will include events from the 18th century such as Industrial Revolution, world wars, Redrawal of National Boundaries, Colonization, Decolonization, political philosophies like Communism, Capitalism, Socialism etc.— their forms and effect on society. 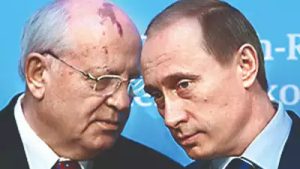 Who was Mikhail Gorbachev?

What are Gorbachev’s reform mantras?

Gorbachev’s legacy is defined by  two words: “perestroika” and “glasnost”.

Some of the mistakes of Gorbachev: