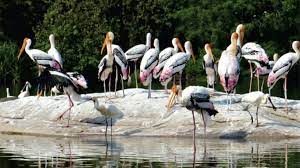 Prelims: General issues on Environmental Ecology, Biodiversity and Climate Change – that do not require subject specialization.

What are the criterias led down by Ramsar Convention to designate a wetland as Ramsar sites?

There are nine criterias laid down by the convention which need to be met to get Ramsar tag.A wetland should be considered internationally important if: