News: The Supreme Court Monday issued notice on a plea seeking cancellation of registration of political parties that use religious symbols or names of religions in their nomenclature.

GS Paper 3: Salient features of the Representation of People’s Act. 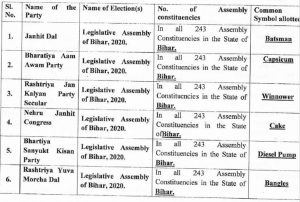 Significance of symbols in elections:

Types of symbols as per the Election Symbols (Reservation and Allotment) (Amendment) Order, 2017:

Basis on which  Election Commission decide on party symbol disputes: