News: In keeping with the spirit of the ‘Azadi ka Amrit Mahotsav’, the country is taking steps to curb littered and unmanaged plastic waste pollution. 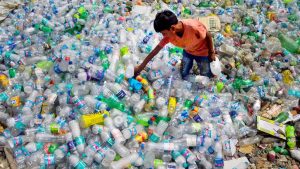 What is single-use plastic?

What is the environmental damage from single-use plastic?

What are global responses towards tackling pollution due to plastics?

What are the key features of Plastic Waste Management Amendment Rules, 2022?

How will the ban be enforced?

What are the challenges in enforcing these bans ?